“I haven’t been a good person. I have had too many affairs previously. Even this marriage arrangement is hurriedly done because my parents came to know of my latest affair. I guess, you must be wondering as to why I am telling you all this. Its because I don’t want our marriage life to start off on a dirty secret. After this, its left to you, as to what you think of me.”

“Greet the elders and the bridegroom”, Lalitha’s parents instructed her. She dutifully greeted them and served them coffee. Jairam could not help noticing how pretty she was, and his insides cringed a little when he thought of the confession. Lalitha observed that he was gazing at her and smiled inwardly.

An hour went by. “I want to talk to the bride alone”, said Jairam. His parents were alarmed on hearing this. He gave a reassuring smile to his parents and waited for the elders’ consent. He then went into the room where Lalitha was waiting. The confession started.

Present time
-------------
Lalitha stood waiting for Jairam’s response to her confession. He appeared shocked. If he was a guy with forward thinking, he would definitely forget her past, wouldn’t he??

"No more junk foods and colas", is the latest health measure, planned by our Hon. Health Minister, Anbumani Ramadas. He is going to talk to the chancellors of the various universities in the country, and is planning to implement this measure. He reasons that junk foods and colas are the main reason for obesity among the youths of today. Only natural foods should be served. That set me thinking..... Will he ban the software industry one day?? :) I mean, all we do is sit in front of the system and type. Wont that cause obesity to us?? ;) Anyway, is banning junk foods like pizzas, samosas, chips, (fried groundnuts?? :-) ) , a step in the right direction?? For my part, I have envisioned how the "natural food eating students" and their classrooms, after this health measure is implemented in the future will be...... 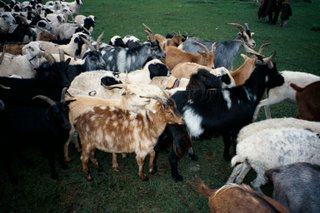 First of all, thanks to all u ppl, for that enthusiastic response to my series on my room mates. :) Since some ppl cudnt stomach the thought of Amrita Rao dreaming about me, will be back with another story soon!! My next series will start soon, and it is tentatively named “Blast From The Past”. I will go into general issues for now.

Most of you know would know about the concept of going for a honeymoon. For those who don’t, here’s the gist. After marriage, the bride and the groom go to an exotic location, to understand each other (??), and then they return and work for two years to pay off the debts on their honeymoon!! :). Is Honeymoon a short form of "Honey, I am over the moon after marrying you??" Hey, all this talk about marriage reminds me of a joke which can’t be published here for obvious reasons. People who want that joke can mail me, and I assure you that your identities will remain a secret. I will disclose it only in my next blog. He he… just kidding!! :)

Neways, this happened a year and a half back!! Before that, a quaestion!! Ever been in a situation when as u comment, everyone turns silent?? You will understand why I said this at the end!! So, I had been to my friend’s house. His relatives (which consisted of the bride and the bridegroom also) had come over there. The bride was showing the photos of their honeymoon trip to everyone. They had been to Europe. I was sitting at the back, (where will my class room mentality go??), with my friend and his gang, and passing comments.

The bride was telling us about another couple, accompanying them in the plane. “They didn’t come for sight seeing at all. Come to think of it, they didn’t step out of the hotel at all”. I didn’t notice that the whole room had gone silent, as I commented, “well, I think that they were the ones who understood the concept properly”. :-D Everyone heard that comment. I looked up sheepily and saw that the bride’s face had turned crimson red, and the groom was looking resolutely away!! I excused myself from the place, and just ran from that spot!!


I have never been to their place after that!! :(