Senior looked at his watch. His son's tuition was about to end. The students were descending the stairs. One more parent picked up a conversation with him. "Sir, you have a very good son. Generally, the boys keep looking here and there, and check out the girls. But your son is not like that. I have always seen him looking down while coming from the class. You have brought him up well sir."

Junior got into the car, as senior started it. "You know, a father of a girl, praised you today. It seems he has observed that you dont look at girls when you come out from the tuition class. Nice to hear this. I am happy." He noticed the grin on Junior's face and asked, "Whats the matter?"

"The road from the tuition to our car is muddy and full of Dog's poo. Hence I was looking down and walking so that I dont soil my shoes and pant. You know me. Do you think I dont look at girls?"

He didnt know how to start. He was sitting across her in the restaurant. She looked achingly beautiful in her red tops and blue jeans, even though she had very less make up. He had always liked her. "Today would be the day", he had told himself. But somehow he wasnt able to. He just wanted to blurt it all out and run away from there without waiting for her response. "Latha....", he started. "Munbe vaa....", a popular song started playing through the speakers. "They are playing our song", she remarked. She blushed when he looked at her after a long pause. She smiled and he smiled back. He felt one with the song.

I saw Sivaji at last, yesterday. Was it worth all the hype? My views on the same:

1) Rajini: Thalaivar is in full flow in the movie. His mannerisms, style, dialogues all rock. Especially, “Panni thaan koottamaa varum. Singham,…..”, after shaking off the thugs, “singleaa thaan varum”. *Whistle Whistle*. His comic act with Vivek is very good. But I didn’t like the romantic part. Got irritated after some time. Motta Boss style and sequence was the best, esp, “Sivajiyum naanae, MGRum naanae”.

2) Vivek: I guess, Vivek thought it better to leave the social messages to Shankar. For once we are spared from his “ paavi, ada paavi….” He is spot on with his one liners, and comic interludes. With “Vara vara chinna pasanga ellaam virala thookittu style panraanga”, he cocks a snook at Chimp and all the other rookies!!

3) Shreya: Absolutely $exy!! As usual, in the scenes, she is the embodiment of Thamizh kalaachaaram, and in the songs, Abachaaram Abachaaram!! But *drool* me no complaining!! :)

4) Songs: The picturisation is cool!! The song “Athiradee” is a nod to Robert Rodriguez’s movies, esp, Desperado!! The guitar handle used as a gun, the guitar case used as a rocket launcher, the scene where the enemies attack Antonio Banderas and Salma Hayek on the bed, is used in this song. Sets are lavish in “Sahanaa” and “Vaaji Vaaji” songs

5)Technical aspect added to the final gloss. Stunts were good, though me thinks that Peter Hein is still in awe of the Matrix. The final fight is sort of a “The bride” (Kill Bill) meets Neo (The Matrix).

I found only one negative aspect, Story. Agreed that we shouldn’t see any story in Rajini’s movie, which is usually a rags to riches story. But having a half baked one, and that too, an oft repeated theme, is too much. Give us Padayappa any day, I say. I lost all my fondness for Shankar after Anniyan. He is proving out to be a DJ in movies, like, “Add a bit there, and here”, and you have a one man vigilante movie, albeit with some variations :( Hope India becomes a better country soon so that Shankar spares us from his wild lectures on making India a super power and goes on to make better movies which he is so much capable of.

So did I like the movie? Yep. Will I watch the movie again? You bet!! :) “Paera kaetta chumma athiruthullaa??” *Whistle Whistle*

He was an easy going type. He never regretted his past, and never thought about the future. He was a software engineer, but his heart belonged somewhere. He was an extreme extrovert, and made friends, wherever he went. A self confessed romantic, he fell in love with everything, from nature to matinee idols. He loved to procrastinate, and ended up doing that!! He did all the fun part in his company, and was respected for that.

She was an extreme introvert. She was a careful planner, and even if you ask her now, "What will you be after 5 years?", she will have an answer for that. She was an investment banker, and she was one of the few who let her career take over her life. She was a cynic in most of the cases, and never trusted anyone forthright. She had few friends in her life, but she trusted them with her life. She took all the managerial decisions in her work and she was respected for that.

Their marriage was fixed on the 13th of July. 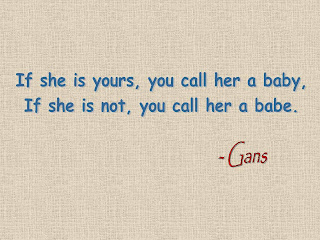 If you are all familiar with the Mughal heritage, you will be familiar with names like Jahangir, Akbar, Noor Jahan, Shah Jahan, and Mumtaz Mahal. Taj Mahal is also likely to ring a bell in your head. Taj Mahal was constructed on the behest of Shah Jahan so that his love for Mumtaz Mahal will be immortal. But have you ever wondered as to why it came to be known as the Taj Mahal? Shouldn’t it have been Mumtaz Mahal, in the name of his queen? It would have been okay, if the name “Mumtaz Mahal” had degenerated to “Mumtaj Mahal”. Of course there is the danger of sounding like a TR movie with Mumtaj as the heroine. But Taj Mahal??

Now in his explosive book, Prof. Gu-Man-Gut-Hu, a Chinese Professor, and a bachelor only in History, blames it on the English language, a la, Dr. Ramados. In his own words, “Why is it called Taj Mahal? If Shah Jahan was so much in love with his wife, shouldn’t it have been Mumtaz Mahal? The blame for this can be squarely put on the English Language. Most of the words have multiple meanings. As you all know, to stay Mum, is to be silent. People have taken the literary meaning, and excluded Mum from Mumtaj, making it Taj Mahal”

Sorry for the distarpance if it was too much of a mokkai. :) But PJs apart, Voting is going on for the new . Please go to this site and vote for the Taj Mahal.